Focusing on the extreme good and bad days means we often miss the okay day - and if they're the majority of days, that's a great place to be!
By Matthew Knight
September 15th 2021 in Guides and Support

Did you know, that if you smell something for a long time, you’ll start to stop noticing it pretty quickly? That’s one of the reasons we don’t know our own odour (until it changes).

Our body is designed really well to focus on change (often perceived as threat) and ignore things we’re used to, because if they’re happening all the time, they’re probably not “dangerous" to us - or at least our monkey brain works this way, because we haven’t really evolved that much since sabre tooth tigers were chasing us across the plains. Our stress system is designed to create high alert to new situations, and less focus or attention on established situations.

Likewise, if you’re working well for a while, you might forget the days you’re doing okay, in contrast to the days where things are feeling dreadful - and this can have a significant impact on how we’re feeling about our work and how we work. 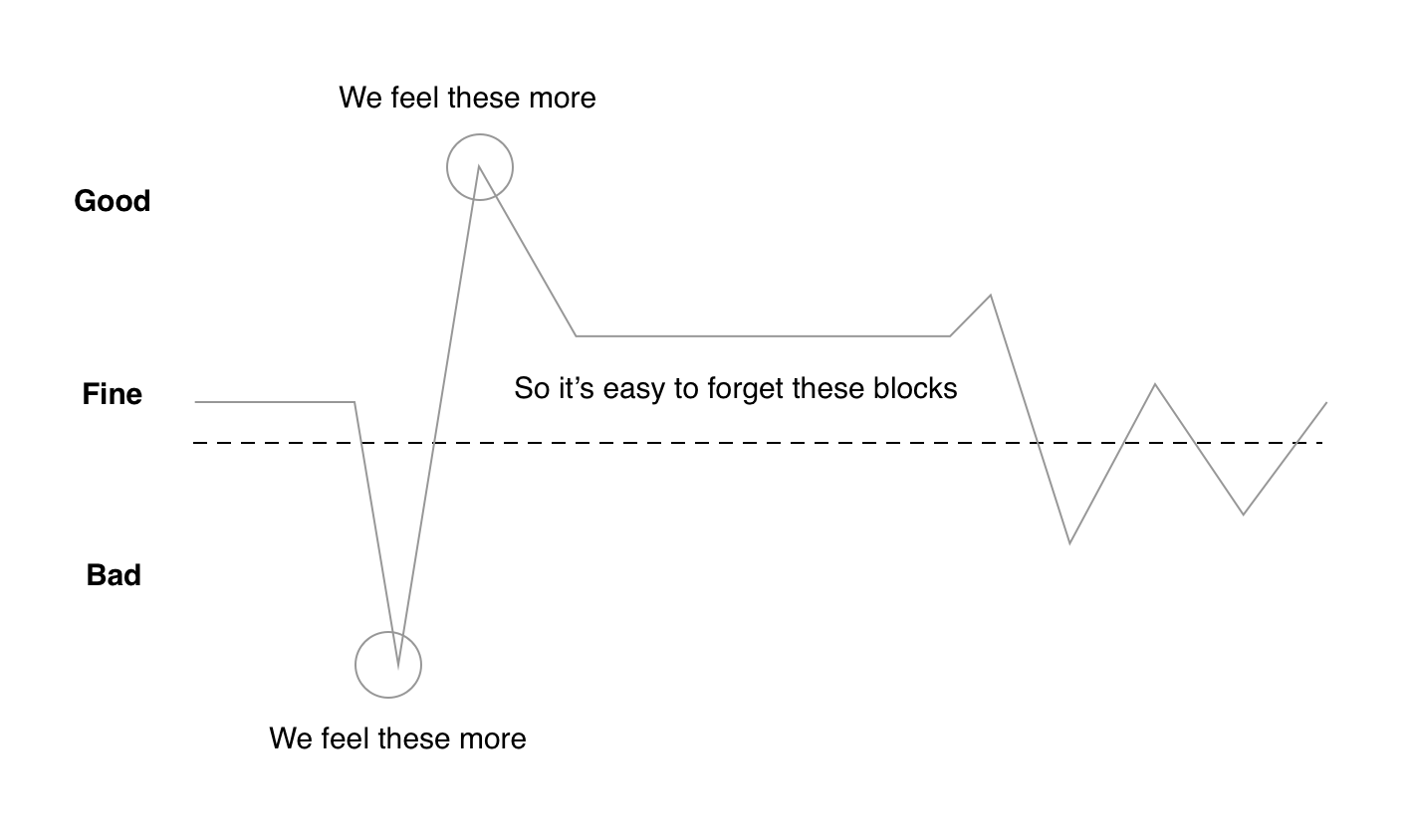 But are we forgetting the in-betweens where perhaps we have an adequate amount of work? It’s nothing to blog about, it’s not groundbreaking or award winning or revolutionary, it’s just the middle of the bell curve work which is the bread and butter of most people’s career.

It’s so easy to forget all of the days where we are working, we do have income, and it’s just ticking along fine - and so easy to remember the heightened extremes of too much work and not enough work, or feeling amazing and feeling dreadful.

Taking any single moment in time as a good measure of how things are playing out over a longer period of time will always give skewed results, so when you’re self-employed, it’s really important to be able to look at how things are going in aggregate over a longer window of time - three months rather than three days, the year in total, rather than just this month, and then see how you’re getting on.

Perhaps actually you’re still working the majority of the time, you worked a little more last month, so it’s not dreadful if you’re working less this month. The ups and downs, the extremes, smooth out when you look over a wider period of time.

That’s why journalling is such a powerful tool when you’re self-employed. You’re creating a tangible record, evidence of what you’ve been doing and how you’ve been feeling, which you can look back over time, and see what trends are occuring, rather than just focusing on the spikes.

That isn’t to say all trends are good - you might be noticing a downward trend of how you’re feeling, how much work you’re doing, how much you’re charging - in which case, there’s something to be done. But you might also notice things are pretty flat, or even better, they’re improving in the macro.

Tools like your invoicing and accounting platform can give you a little bit of the sense of this - you can see your income and outgoings over a 12 month period. But you’ll need to look at more than just income - what value are you getting from work, how many hours are you working, how are your emotions? There are plenty of things you can track over time - but looking at the bigger picture really helps to understand the reality of how you’re doing, not just today.

So, waking up and smelling the coffee might be a good start, but don’t get trapped by worrying about one bad cup, when most mornings, you might be doing just okay.

Done the work? Get it accepted

Just because you've delivered the work doesn't always mean the project is over. Freelance Project Director Charlotte Kelly shares her advice on having your work accepted by the client.

Leapers Annual Report on Mental Health and Freelancing in 2022

Our annual study into the mental health of the self-employed during 2022 has been published. How are we doing, and what more can be done to support each other?

Once you go freelance, can you ever go back?

Having control over your work is about being able decide how you work, even if that means being in employment.

Back to work in January

Here is our guide to getting back into the swing of work during the dark January days.

We've been supporting and writing about mental health and self-employment since 2018.
So there's probably an article on what you're looking for in here somewhere...
Browse archives

We can keep you posted on new articles, content and support from Leapers - just leave us your email address. We'll never share or sell your details, nor spam you - just occasional updates on new ways of working well, useful for every modern worker.